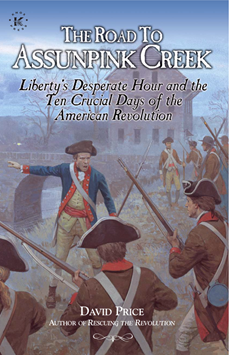 THE ROAD TO ASSUNPINK CREEK

Liberty’s Desperate Hour and the

(Knox Press, 2018, ISBN 978-1-94849601-8 HC/978-1-94849607-0 PB) The reader is offered a new perspective on the “Ten Crucial Days” of the American Revolution—the period from December 25, 1776 through January 3, 1777—in which George Washington’s army won its first three significant victories. This work presents a unique interpretation of this critical period in American history by emphasizing the importance of the Battle of Assunpink Creek on January 2, 1777 (often referred to as the Second Battle of Trenton). This encounter has generally received less attention from historians than the other two engagements fought during this brief span of time; however, it was arguably the most pivotal event of the "Ten Crucial Days" and possibly of the entire Revolutionary struggle. Perhaps no military action in our country’s history is more paradoxical than the one on the road to Assunpink Creek, and at the bridge that crossed it, in the sense that its obscurity in the public mind and neglect by many historians is so disproportionate to its impact on the course of a conflict with global implications. 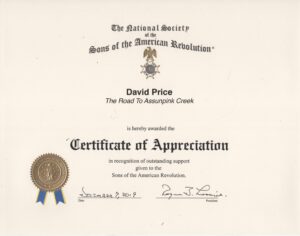 David has been awarded a National Society of the Sons of the American Revolution Certificate of Appreciation for The Road to Assunpink Creek.

Praise for THE ROAD TO ASSUNPINK CREEK

“David Price has given us a clear, succinct, and gripping account of one of the pivotal moments of the Revolutionary War. This is an excellent portrayal of the battle and a reminder that there was much more to Washington's crossing of the Delaware than is usually remembered.”
—JACK KELLY, author of Band of Giants: The Amateur Soldiers Who Won America’s Independence

“Assembling the best scholarship on what has been called the ‘Ten Crucial Days,’ David Price has rightfully elevated the crucial importance of one of the least remembered battles of the Revolution—Assunpink Creek. The Road to Assunpink Creek is a finely crafted argument and illuminating book that shines light on many forgotten aspects of the battle, including the key role played by Edward Hand’s Pennsylvania riflemen. Price’s book is must reading for anyone interested in the Revolution.”
—PATRICK K. O'DONNELL, military historian and bestselling author of The Indispensables: Marblehead’s Diverse Soldier-Mariners Who Shaped the Country, Formed the Navy, and Rowed Washington Across the Delaware

“Drawing on the interpretations of noted historians of the ‘Ten Crucial Days’ that saved the American Revolution when defeat seemed imminent, David Price tells the exciting story of those critical hours emphasizing the little-known, often neglected, but really very important battle at Trenton on January 2, 1777 that was a prelude to the Battle of Princeton the next day.”
—WILLIAM L. KIDDER, author of Ten Crucial Days: Washington’s Vision for Victory Unfolds

“The Battle of Assunpink Creek, or Second Trenton, bracketed by the more storied First Trenton and Princeton engagements, is typically under-chronicled by historians and unknown to laymen. David Price’s The Road to Assunpink Creek raises this overlooked but critical action to the status it rightfully deserves. Utilizing original sources and accounts by participants, Price deftly leads the reader through the latter part of the ‘Ten Crucial Days,’ offering a detailed explanation of both the battle and its ultimate importance. I certainly recommend this to all.”
—BILL WELSCH, President, American Revolution Round Table of Richmond and cofounder of the Congress of American Revolution Round Tables

“David Price's concise analysis of a little-known yet significant Revolutionary War battle is both enlightening and entertaining.”
—GLENN F. WILLIAMS, Ph.D., Historian, U.S. Army Center of Military History, and author of Dunmore’s War: The Last Conflict of America's Colonial Era and Year of the Hangman: George Washington’s Campaign against the Iroquois

A nineteenth-century rendition of the Battle of Assunpink Creek by an unknown artist.

“David Price presents a strong case for the crucial importance of a battle that he believes pivoted the entire course of the Revolutionary War: the Battle of Assunpink Creek on January 2, 1777. He says historians might see his approach as 'contrarian and unconventional.' I found his argument and the evidence he presents compelling.... I recommend this well-documented narration of a crucial time in our nation's history that turned the tide of the Revolution.”
—JUDY SALCEWICZ, Member, Lawrence Historical Society Board of Trustees, for Places in Time, the LHS newsletter (Vol. 28, No. 2, Spring 2022)

What readers think of THE ROAD TO ASSUNPINK CREEK