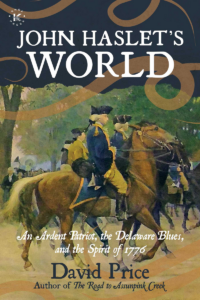 An Ardent Patriot, the Delaware Blues,

(Knox Press, 2020, ISBN 978-1682619452) This is the story of Colonel John Haslet, an Irish immigrant to the American colonies who made the ultimate sacrifice while fighting for his adopted country at a pivotal moment in our war for independence against Great Britain. It is also a chronicle of the inspirational leadership and service of the Delaware Regiment, known as the “Delaware Blues,” which Haslet formed and guided—perhaps the finest fighting force in George Washington’s army in 1776—told as part of a more wide-ranging narrative about the campaign of Washington’s Continental army in that critical year. The climactic moment occurred when Washington’s battered but resilient force faced the prospect of total defeat in the winter of 1776-1777 and the quest for American independence hung in the balance. The Delaware Regiment fought valiantly and inspired others, and their identity and historical reputation became forever intertwined with their colonel’s. In the end, John Haslet left his regiment, the army, and his country an unsurpassed example of unyielding devotion to the cause of individual liberty and American independence.

“John Haslet is a largely forgotten yet important figure in the Revolution. David Price has written the definitive treatment of this hero. Crisply written and well-researched, Price has brought Haslet back to life on the printed page.”
—PATRICK K. O'DONNELL, bestselling author of The Indispensables: Marblehead’s Diverse Soldier-Mariners Who Shaped the Country, Formed the Navy, and Rowed Washington Across the Delaware

"Delaware's Revolutionary War hero John Haslet should be much better known. I am delighted that David Price has taken on this task! Price's book is both well-written and carefully documented. I highly recommend it!”
—KIM BURDICK, M.A., M.P.A., founder of the American Revolution Round Table of Northern Delaware and author of Revolutionary Delaware: Independence in the First State

“David Price has composed an interesting and informative narrative history of Colonel John Haslet and the 1st Delaware Regiment of the Continental Army in the early phase of the Revolutionary War, neither of which should be overlooked or forgotten as we approach the semiquincentennial of our nation's independence.”
—GLENN F. WILLIAMS, Ph.D., Historian, U.S. Army Center of Military History, and author of Dunmore’s War: The Last Conflict of America's Colonial Era and Year of the Hangman: George Washington’s Campaign against the Iroquois

“David Price's book, John Haslet's World, artfully weaves the life of Haslet and his Delaware Regiment with the storied major events of the American Revolution to create a long-needed portrait of this patriot. Frederick the Great once said that he had seen colonels decide the fate of empires. The reader will see how Colonel Haslet and his Delawares arguably played just such a role at Long Island in 1776. A worthy read.”
—RICHARD J. KANE, SR., Chairman, Swan Historical Foundation, dedicated to encouraging knowledge and appreciation of the American Revolution for the benefit of present and future generations

“Colonel John Haslet was the Delaware Continental most likely to attain general officer rank. Instead, he fell valiantly on the battlefield. Now David Price, in this fine biography, leads us on an engaging tour of Haslet’s journey to that fatal encounter. Price chronicles Haslet the minister, physician, planter, politician, and officer from Ireland to Princeton, breathing life into this Renaissance and revolutionary man. Along the way, we learn of Delaware’s colonial history and the Delaware Regiment. But Haslet remains the focus of Price’s well-paced and informative story, offering the subject well-deserved recognition. I highly recommend this book.”
—BILL WELSCH, President, American Revolution Round Table of Richmond and cofounder of the Congress of American Revolution Round Tables

“If there ever was a book about one regiment, one state, that covers the trials and tribulations of the American Revolution, this is one you can’t skip by. It is almost unbelievable that this one regiment from one of the smallest states impacted the outcome of the Revolution not just once but time after time, each and every year of the war.”
—CHRIS MLYNARCZYK, President, 1st Delaware Regiment

“A true American hero gets the biographical treatment he deserves in David Price's fine book. Well-written, well-researched, full of detail but never burdensome, always engaging, a deep read yet not a hard one, this book belongs on the shelf of anyone interested in the Revolutionary War.”
—JEFFREY EVAN BROOKS, author of Shattered Nation: An Alternate History Novel of the American Civil War

“David Price gives us a powerful and concise account of Revolutionary War hero John Haslet and his Delaware Continentals. An inspiring story told by a gifted writer.”
—BILL HAMPTON, President, Washington Crossing Chapter, National Society of the Sons of the American Revolution

“In this well-chronicled account, David Price tells the story of Revolutionary War hero John Haslet and how his inspiring leadership and sacrifice helped turn the tide of the American Revolution during the ‘Ten Crucial Days’ campaign of 1776-77. David’s work is a great addition for any history enthusiast wanting to learn more about some of the lesser-known heroes of the Revolution, or the ‘Ten Crucial Days.’”
—JENNIFER MARTIN, Executive Director, The Friends of Washington Crossing Park

“David Price’s latest book, on the life and times of John Haslet and his Delaware Regiment during the Revolutionary War, is a flat-out winner. This is a must for those who would like to dig deeper into the human side of the war.”
—THOMAS MADDOCK II, Historical Interpreter, Washington Crossing Historic Park

“David Price’s latest work, John Haslet’s World: An Ardent Patriot, the Delaware Blues, and the Spirit of 1776, is his third book about what Revolutionary historians frequently refer to as the “Ten Crucial Days,” covering the events between December 25, 1776 to January 3, 1777. Price devotes his energies and writing talents to the men who fought for Washington and the infant nation. Washington and his commanders get attention, obviously, but Price writes about those who fought, died, were wounded, dressed in rags, and walked on swollen feet through snow and water. Their efforts helped the nation survive its birth against overwhelming odds. Although the biographical data on Haslet is limited, Price provides an exciting and intense narrative about Haslet’s role at Long Island, White Plains, Mamaroneck, Trenton and finally, Princeton.” (Read entire review here.)
—TIMOTHY SYMINGTON, for the Journal of the American Revolution

“Price uses key events in colonial America and the War for Independence to put into context the sacrifices that Haslet made for his country. Along the way, readers are exposed to life in the eighteenth century colonies and reminded of the challenging start of the American Revolution. The book provides us with a better understanding of the events that shaped our independence and remembers the 'virtues of a man, merits of a citizen and services of a soldier.'” (Read entire review here.)
—JOE CAMARATTA, Historical Interpreter, Washington Crossing Historic Park, for Crossing Currents, the newsletter of The Friends of Washington Crossing Park

“More than another book on the American Revolution, Price’s work uses his years of expertise and love of history to write a fresh chapter and tell the story of a man who embodied the yearning for a nation built on the premise of equality and the inalienable rights of life, liberty, and the pursuit of happiness.” (Read entire review via one of the periodical links below.)
—DAN AUBREY, US 1 and the Lawrence Gazette 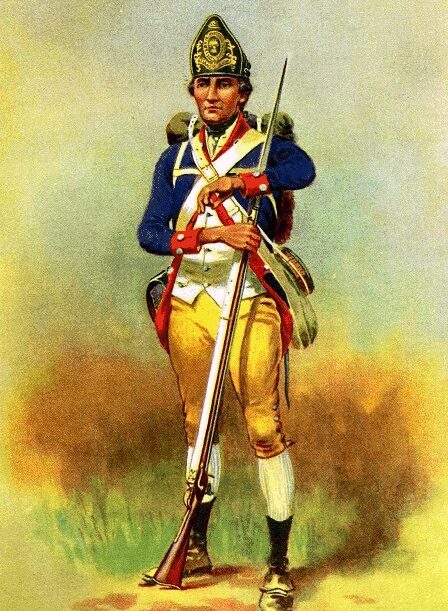